In 2017, I began a new science fiction series and published the first book in November, 2017. For this series, I planned to set the stories in the near future of our solar system, and gradually advance outward into the galaxy. The overarching theme is the story of how humans acquired the technology for space travel and their encounters with aliens from other worlds. The characters would be ordinary people, not superheroes or psychics, and various alien species.

I invented the name, Taxyon Space, for the series to suggest faster than light space travel. My initial idea was to set each story on a different celestial object, a planet or moon. For the first book, EUROPA, I imagined a race of human-like “mermen”.

The Warrish are amphibious with gills and lungs to breath in water and air. They have greenish complexions, six fingers and six toes, but otherwise could pass for humans. Their society on their home world, Rishalt, is centered on triads and hexads. Triads consist of three men or three woman. Ideally, a triad would be three brothers or three sisters. Alternatively, men or women may be adopted to form a triad. During military service, Warrish can be conscripted into a triad. Triads are organized into the First, the Second and Third in order of age. Firsts lead their triads. Triads have unique names and tattoos on their cheekbones. They dye their hair in matching colors and often wear bracelets engraved with the family emblem.

The Warrish society is hierarchical. It is governed by the three Primes and Nine Triarchs. You will learn more about this society in the second and third books of the series. The principal city on Rishalt, Pucklerakt, is constructed above and below the sea like an iceberg.

The elite in Warrish society strive to create strong alliances by arranging unions with the families of the Primes and Triarchs. Thus, most of the elite are interconnected by the triad and hexad system. Unfortunately, this society is not kind to those outside the triad system. If you lose a member of your triad, you must adopt a replacement or become an outcast. As you can imagine, people die by accident, illness, or in battle. People with physical or mental defects are also at a disadvantage.

Jupiter’s moon, Europa, was an attractive prospect for the setting of the first story with its well-known potential for life in the ocean under the surface ice. In this near future (unstated) time, humans have established a small colony of scientists on Europa to study Jupiter and the life in the oceans. The colonists constructed Galileo Station on two levels, one within the ice crust with access to space, and the other on a plateau on the seabed. The book begins with a dramatic episode where the heroine, marine biologist Dr. Nikki Bell, escapes from a damaged spaceship only to crash on the icy surface of Europa.

Nikki is a true scientist, dedicated to the study of Europa’s marine lifeforms. She is also persistent in her search for her mysterious savior. During the story, she discovers intelligent native animals and learns how to communicate with them. It is dark in the waters under the ice crust, and the heroine must use artificial lenses with infrared vision and low light intensifiers when she explores the submarine world.

I enjoy imagining new worlds and their exotic inhabitants. Some of the creatures I envisioned resemble those in the NASA poster (see below from https://www.jpl.nasa.gov/visions-of-the-future/ ) with a few twists. My creations with an alien type of intelligence are polymorphic animals that morph from a disk-shaped floater form to a squid-like shape. 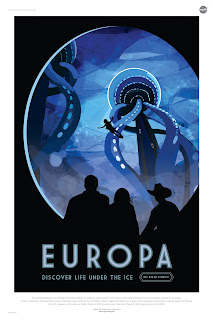 The story really crystallized in my mind after I saw the hero’s face under the ice. The heroine has fallen into a deep crack in the ice and lands on a thin transparent sheet of ice on the surface of the ocean. Nikki is desperate, knowing she will die without help, when she sees a man’s face in the water. He smiles. She hopes he will rescue her, if he is in fact a real person and not an hallucination.

This scene is a pivotal moment in the plot. The hero and heroine are curious about each other attractive and want to meet again despite the impediments. The human colonists are unaware of the alien observers in their secret submarine base. Despite the colonists’ skepticism, Nikki persists in searching for her mysterious rescuer. The alien hero, Kiron, wishes to warn her of the dangers, and their meeting is inevitable. Their interactions with other characters amid the hazards of the moon lead inexorably to tragedy and exposure of the secret alien base.

The story is told from the perspective of the two main characters, Nikki and Kiron. Their personalities evolved, or became clearer to me, as I wrote the story. The alien hero, Kiron, was undoubtedly the most difficult to create. He resembles a human in many ways, but is capable of living underwater as well as on land. I had to describe his unusual physical features, and the distinct society of his people, the Warrish. He is not alone. He is one of the Warrish Watchers who monitor the activities of humans form their base in the oceans of Europa. His companions are supporting characters with their own personalities and minor story arcs. I slipped in parts of his backstory to illuminate his character and the alien culture. Kiron is by no means an “alpha” hero. He is abused and has suffered misfortunes. He has a fine sense of honor and believes in saving lives rather than killing. He is also sweet and compassionate, a romantic in a society where romance has no place.

In creating Kiron’s backstory for Europa, I realized his people came from an extrasolar planet. When Nikki meets the Watchers, she quickly deduces that his people did not evolve on Jupiter’s moon since the Warrish are unlike any of the native lifeforms.

When I was writing Europa, I realized that Nikki and Kiron’s story had not finished. Their friendship is doomed under the rules of Warrish society.

In the second book, the setting moves to the Warrish home world of Rishalt. Kiron’s parents demand his return and submit to the advantageous union they have planned with a high-ranked female. Fortunately, Nikki is recruited into a diplomatic mission to Rishalt. She must learn to negotiate this alien society and learns the surprising truth about its leaders. Yes, there is a happy ending.

In a new plot twist, Nikki and Kiron are sent back to Europa with the task of unblocking the hyperspace route from Jupiter to Rishalt. The hazards of unstable hyperspace travel are compounded by rising tensions between humans and Warrish. Someone has stolen a key alien device, and Earth’s governments are disputing the benefit of an alliance with the Warrish.

After completing this trilogy about Nikki and Kiron, I wanted to introduce new protagonists for the next books in the series. Since Warrish culture favors triads of three brothers or three sisters, I decided to base the next stories on three brothers, the Tallis brothers of the Flaming Comets triad. Books 4-6 are named for the brothers, Alarik, Baswin and Karrik. These books describe how each brother meets their romantic mate, their adventures, and the gradual unravelling of the mystery about the alien spaceship that crashed on Mars.

In the background to these stories, the youngest of the Tallis brothers was crippled during their battle against the Swarm. The two oldest Tallis brothers have been forced to serve as undercover agents on Earth in order to support the medical care for their youngest brother.

Alarik is the oldest brother or First of the Triad and his story comes first. He is living on Earth under the alias of Rick Kent, a fake wealthy miner from the Asteroid Belt. When he reports the news about the discovery of the crashed alien spacecraft on Mars, he is ordered to investigate. His journey interweaves with the story of Phoebe Wong, a veterinary scientist on Mars, and the repercussions from the mysterious alien spacecraft. The story moves from Earth to Mars and ultimately to Europa where Phoebe and Alaric meet several characters from the earlier books.

Sep 2-Oct 1: Sci-Fi Blast - https://storyoriginapp.com/to/lvbuYQ6
Posted by Aurora Springer at 8:00 AM No comments: