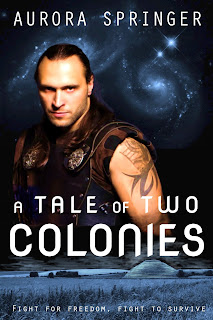 “I loved this sci fi story.”


“This was an excellent story about love across the galaxy and the love of exploration. A fun quick and whimsical read!!!”


“An excellent story of how two societies can live together for the betterment of all.”


Fight for freedom. Fight to survive. - For refugees from an overcrowded Earth, dreams of a better life on an alien planet transform into a terrifying battle for survival.
Nothing will stand in the way of Tiger Lily's dream of escaping the subterranean slums of Terra and visiting the stars. She enters the fierce competition for a place in the scout team on the next spaceship to the remote planet of Delta, where an earlier colony disappeared. Before the ship departs, the arrival of a mysterious message from Delta suggests that the descendants of the first colonists may have survived.
A dangerous mission to seek the lost colony exposes the team to unexpected dangers, and they encounter a grim warrior in the isolated valley. Has Tiger Lily met her match in the tortured man? Where is he leading them? And who are the real rulers of this strange world?
Do you enjoy exciting adventures with alien encounters? Do you like your science fiction with a dash of romance? Read “A Tale of Two Colonies”, a story of betrayal, survival and hope by indie author, Aurora Springer.

In the isolated peninsula beyond the great mountain range, a tall man stood on a rock staring out across the ocean. Waves flicked foam onto his heavy black boots, and swirled over the stony beach. A warrior in appearance, the man wore close-fitting black armor and a long sword hung from his belt. He swung his gaze from side to side, seeing nothing move except for the crashing waves. No other sound interrupted the surge and splash of waves on the stones. He jumped off the rock and strode into the sea, testing the waters.
When he was knee deep, a monstrous grey head with curved teeth rose out of the deep water beyond the rocks. Its huge eyes swiveled to regard him, and then, its enormous body looped out of the water, plunged back and sank, vanishing beneath the surface.
The man paused, scanning his surroundings for danger. He did not go further into the sea. Instead, he splashed through the shallows, moving parallel to the narrow stretch of beach.
A long tentacle coiled out of the ocean and wound around his ankle, tugging him off balance. He staggered and quickly recovered, putting his weight on his free leg and shaking the tethered foot. In the next instant, he slipped his sword from the sheath and slashed off the end of the tentacle, freeing his leg.
He leaped out of the frothing waves onto the beach. Two more tentacles snaked from the sea toward him, and were rapidly sliced apart by his blade. More tentacles shot toward him, and a bulbous orange body emerged from the sea. A hard beak snapped open as it slithered into shallow water.
Backing away, the man aimed for the safety of higher ground. The tentacled beast crept after him, soundless and inexorable.
Abruptly, it emitted a frightful screech. The first, larger monster broke the surface and grabbed the tentacles in its scimitar-like fangs. The huge grey beast clamped its jaws and drew its orange tentacled prey deep into the ocean.
The warrior stepped back onto dry land. There was no escape here. No safe passage through the ocean, teeming with such deadly monsters. Shouldering his heavy pack, which he had left well out of reach of the incoming waves, he strode north along the coastline toward the distant peaks.

Three days later, he stood beside a vertical cliff, rising a hundred feet above him. He slid the pack to the ground and stared up at the precipitous rock face, searching for footholds. He placed his booted toe onto a small projection, and pulled his body up using his fingers to grip into a tiny crevice. In this slow manner, he climbed perhaps thirty feet up the cliff. Suddenly, the jutting piece of rock he clung to snapped, and his foot slipped. He fell, skidding awkwardly to the ground, clutching at rough edges to slow his decent, and landing on his feet unharmed. His armor and gloves protected him.
The warrior gazed up once more, and found no better hand or foot holds leading to the top. Shaking his head, he leaned against the cliff and bowed his head in despair. Finally, he was sure there was no safe way out of the valley.
He had made a complete circuit of the land. The perilous seas bordered the territory in three directions, and this vertical rock blocked the fourth edge. He had discovered no escape routes along the coast or the mountain range bordering the valley. What was left? In his mood of bitter despondency, he imagined climbing high into the mountains, as he had done earlier in his search, and leaping from the top of the tallest peak. The sheer vertical drop on the far side would kill him, ending his miserable life.
Raising his head to stare into the blue-green sky, he sighed in resignation. The top of the tremendous cliff was invisible, hidden by rolling grey clouds. He was not yet desperate. But, he had no choice except to return to the princesses. Else, they would track him down and kill him, or worse, for his betrayal. He collected his belongings and set out, inland and away from the coast.

Five days later, he strode into the colorful camp in the fading light of evening. Tents with bright banners flying were arranged in a circle around the bonfire. Men bustled about, preparing the meal, collecting fuel for the fire, or checking their weapons. He passed by them, tall and stern, steeling himself for the certainty of insults.
His usual nemesis, Princess Verona, strode away from the fire and accosted him. “Guard Conley, where have you strayed from this time?”
He froze his face into a blank expression with eyes lowered respectfully, and answered bluntly, “Patrol borders by permission of Princess Priscilla.” He was well aware of her distrust. It seemed nothing he did could alter the hatred of the princesses.
“Travel alone is forbidden,” she admonished.
He bowed his head in patient obedience, thrusting rebellious thoughts to the recesses of his mind for fear she would sense them and punish him.
She swung around, scanning the nearest faces and pronounced decisively, “Take one of the Guards-in-training. They need combat and survival skills.”
He followed her gaze to the group of young men lounging quietly beside the fire, their pale faces gleaming in the flames. Their softness and lax manners appalled him. It was another subtle punishment, saddling him with one of these pathetic youths. He assumed the princess desired to restrict his travels. It was a pity there were no worthy companions among the men. Still, the Guards-in-training were not capable of hindering his explorations.