Welcome to another Saturday of Science Fiction & Fantasy and read snippets exchanged by several writers. http://scififansat.blogspot.com/
My new story is a young adult superhero, mystery & romance set in the fictional city of Atalanta, a sunnier, southern version of Gotham City, where a serial killer is lurking on the streets at night.
Last week, Estelle’s friend Veena spotted a strange shape on a roof.
You can read last week’s snippet here –
http://auroraspringer.blogspot.com/2016/03/first-attack-snippet-from-super.html

With a swish of air, a six-legged monster streaked to the ground five steps away. Revealed in the moonlight, a giant praying mantis raised its arms to menace its human prey. The size of a tyrannosaur, its heart-shaped head hovered ten feet above them.
Veena shrieked and fled from the monstrous creature. It leaped onto her. Her screams died away and her limp body dangled from the claws on the long forelegs of the huge mantis.
Yelling at the top of his voice, Alan hared down the street in the opposite direction, fleeing the danger.
Fine protector, Estelle thought grimly. She sent a silent plea, “Rockette!”
“Coming,” the mare replied from a distance.
Squelching her natural impulse to escape, Estelle searched for a handy weapon. Unwilling to abandon her friend, Estelle clenched her fists and took a step towards the brute. Its head swiveled to stare at her, great eyes glinting in the moonlight. Rage swept through Estelle and her fists glowed red. Opening her fingers, she cupped fire in her palm and instinctively lobbed a ball of flames at the monster. 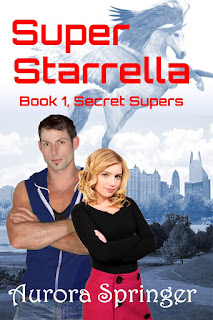 Please return to http://scififansat.blogspot.com/ and read the other snippets.
Your comments are welcome as always.

Posted by Aurora Springer at 1:00 AM