A different perspective? - Excerpt from Bridget Bramble and the Wandering Elf for #WeWriWa

Relax for the Labor Day holiday!

For this holiday weekend, I’m revisiting an earlier book. My new epic fantasy, Bridget Bramble and the Wandering Elf, is discounted to 99c for September to generate interest. I’m currently, albeit slowly, writing the second book in this series. Also I’ll need new covers since the initial cover cannot easily become part of a series with consistent images. I’m considering a switch to more abstract, symbolic covers for this series instead of images of characters. What type of cover do you prefer?

Here's a teaser excerpt from the book: The elf, Windswift, is guiding Bridget on a difficult path through the mountains to the haven of Oakenwald.

The path curved around a ridge out of sight of the main road. Beyond the ridge, it narrowed and cut across a precipitous slope. In many places, the track simply disappeared among the rocks.

Bridget bit back a groan. The track, scarcely wide enough for one person, was not a road in her way of thinking. Elves had a different perspective as well as their mysterious magic. Windswift seemed to be following a clear path, familiar from earlier journeys or marked by secret elvish signs.

Careless of the rattling stones, she hurried up the final stretch to join him.

He merely nodded and walked on.

Nine lines and a little more:

Past the next curve, the path grew worse. It became a thin rock bridge spanning two mountainsides, a knife edge scarcely wide enough for one person’s feet. Sheer cliffs plunged down for hundreds of feet on either side of the track.

Terrified of falling, she slowed to a shuffle, placing one foot at a time with desperate care. Her pulse thudded in fear. She dared not look down past the surface of the track.

A violent gust slammed against her, knocking her off balance.

Her foot slipped over the edge. Tottering over the precipice, she shrieked in terror.

A vice-like grip on her arm halted her descent. With a strong tug, she was pulled into the elf’s arms.

She laid her head against his chest and wrapped her arms around him. He felt warm against her cold cheeks and his back was firm under her clutching fingers. Her initial rush of gratitude shifted into a new emotion. His warmth tickled her senses and sparked desire for his embrace. But he would reject her. Elves despised humans.

Gradually recovering her wits, she said, “I’m sorry. I’m scared of falling. I can’t go on.”

“Don’t be afraid, Bridget. We have only a little farther to go. I’ll hold your hand and steady you on the path.” 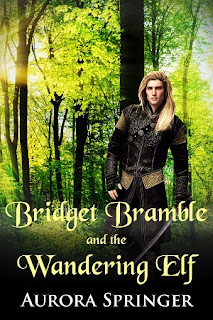 Posted by Aurora Springer at 12:36 PM