Last week, I flew home from my vacation with family in the UK. It’s the first time we’ve visited them in nearly three years. You can see some photos from my trip in the previous posts.

I’d like to give you a taste of a new story I’ve been composing for several weeks. It is Sci-Fi with mystery and a slow romance. For much of the story, the male protagonist is unhappily married to someone else, Princess Allia, who is mentioned at the end of this excerpt.

This excerpt is at the beginning of the story. I’d appreciate any suggestions since I’m struggling with this chapter. I think it illustrates the setting, although it’s a lot to throw at a reader.

Curator Shan Zennia gazed with anticipation at the wall screen as the space shuttle zoomed toward the planet of Harappi. This first glimpse of the location of her new mission stirred a familiar thrill of excitement. She touched the badge of office she wore on a chain around her neck. The badge, a silver sunburst around a pearlescent disk, doubled as a recorder. This assignment promised to be especially intriguing with the potential clash of two cultures amid the annual festival of Vashali.

The screen displayed the view of Harappi from an altitude high above the atmosphere. White clouds drifted over landmasses of dark green vegetation and blue-green oceans. The site of an ancient colony, the planet was mostly jungle with its population concentrated in small coastal cities.

Harappi was unfortunately situated in the nebulous region of galactic space abutting the Emperor’s Sector and the smaller Sectors of Chaktagoonacott and Ptavi. In his warped ambition, Emperor Hadros deemed the planet ripe for exploitation.

He had sent his battleships, and after a fierce battle, his space fleet had defeated the poorly armed Harappian star fighters. Three months ago in standard galactic measure, he had declared victory. Imperial troops had occupied the capital city of Mattapurna, executed the reigning monarch, Maharaja Bahadur, and killed or imprisoned the members of the royal family.

The Emperor had designated his niece, Princess Allia, as the new ruler of Harappi with instructions to subdue its inferior people and confiscate the products of their farms and mines. Domina Allia and her retinue had arrived in the city only twenty five days ago.

Zennia pitied the Harappian people. Judging by her reputation, Domina Allia would be a cruel and tyrannical ruler.

I’ll be happy to reply to your comments. If all goes well, I hope to finish the editing and publish this story in mid summer.

This month is the eighth anniversary of publication of my first novel, The Lady is Blue, although the story was written three decades earlier. The second book in the series was composed and published later in 2014. The third book was published in 2019.

The Lady is Blue is discounted to 99c to celebrate the anniversary. All three books in the series are 99c at my Direct store only.

All books are discounted on my Direct store relative to prices at other retailers. You can find the current (growing) selection at https://payhip.com/AuroraSpringerNovels. 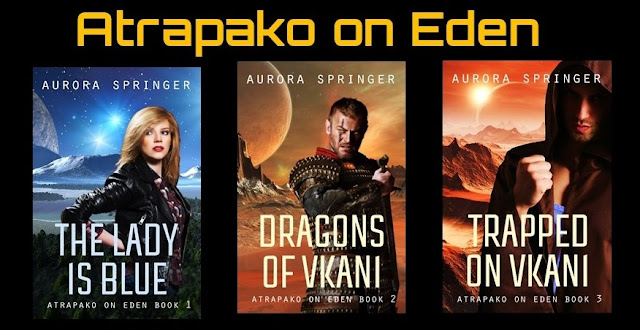 Atrapako on Eden. SciFi Adventure and Romance. Feisty scientist solves mystery of scaly aliens on the remote planets of Eden and Vkani.

The Lady is Blue, Book 1, 99c Direct or Other Retailers

Dragons of Vkani, Book 2, 99c Direct or Full price at  Other Retailers

Trapped on Vkani, Book 3, 99c  Direct or Full price at  Other

Posted by Aurora Springer at 5:35 PM

Email ThisBlogThis!Share to TwitterShare to FacebookShare to Pinterest
Labels: Atrapako on Eden, Cobra