A Troubled Stranger - Excerpt from Cobra for #WeWriWa and #SnippetSunday

You can read last week’s excerpt at https://auroraspringer.blogspot.com/2022/06/an-unusual-combination-excerpt-from.html

I suspect you would like to meet the ‘hero’. This week, I’m skipping ahead to introduce Nagari. He doesn’t appear very attractive at first. Zennia and her host have climbed to the top of a castle tower. (I have removed a couple of sentences about the view.)

Opposite the stairwell, a man was leaning his hands on the stone parapet and staring down. His black uniform, straight-backed stance, and cropped corn-yellow hair marked him as one of the imperial invaders, a military officer or a royal guard.

Her brows lowered in a frown, Pittiprati stopped by the stairwell. She turned aside to stare over the parapet at the river as if she were loath to approach the enemy stranger.

Curious about the man, Zennia resolved to investigate. She ambled in a circuit inside the parapet, admiring the vista across the city to the great river and the forested slopes rising into the hazy mountains.

Drawing parallel to her target, she examined the yellow-haired man surreptitiously. He gave no sign of noticing her approach. His rugged profile was marred by tightly compressed lips, suggesting the anguish of a strong unpleasant emotion. And the way his fists were clenched tightly on the top of the parapet increased her uneasiness about his mental state.

Halting a pace away from the stranger, she made a casual remark, “Isn’t it a lovely view?”

He turned slowly toward her. His face was as ghost-pale and haggard as if he had not slept for many days. Hollow cheeks, pinched eyebrows, and bloodshot eyes with stormy gray irises accentuated his miserable appearance.

He spoke in a dreamlike tone, “It’s a long way down from this height. A man might jump over the parapet and dive to his death.” His accent was strange, although not as peculiar as his words. 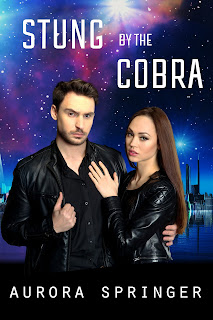 The ebook is available NOW for $2.49 at PayHip

I’ve just begin to post videos on TikTok. If you’re interested, you can find me at: https://www.tiktok.com/@auroraspringer_author

Posted by Aurora Springer at 2:41 PM