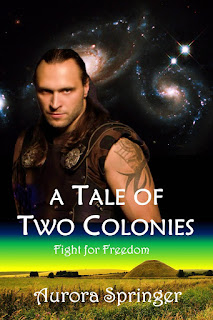 October Promotion of A Tale of Two Colonies:

Giant creepy crawlies, including spiders, attack in this adventure and romance story set on The Planet of the Giant Arthropods, aka Delta, after a local airline (excuse my wild imagination). This story seemed suitable for a Halloween promotion.
The eBook is only 99c until November 1st:
http://www.amazon.com/dp/B00MFY8A5Q

As an Indie author, I appreciate free promotion. But, how well does it work? In September, I ran a small paid promotion on another book and essentially broke even after a week. This month, I tested a different strategy on a stand-alone book.  Using free sites only, I promoted the ebook FREE from Oct 16-20th and then at 99c for the rest of the month.

Crude unscientific summary:
The book hit #1 FREE in Colonization and Space Exploration subcategories on Amazon and I gained a few sales and kindle unlimited reads over the next week or two.

Would I do it again? Yes! This free promotion worked better than the paid one I ran in September on another book and the book achieved temporary prominence after weeks of inaction.

Here are the results:

Listed on the following sites:
http://www.indiebooklounge.com/

eBook discounted to 99c from Oct 21-31
by 29th – 14 sold + a few thousand reads. Not spectacular, but better than the book did in the month before.
Submitted to the following sites:
http://bookpraiser.com
http://bookscream.com
http://bookdealsdaily.com/promote/
http://www.indiebooklounge.com/
http://readfree.ly

Secret Weapons
I acknowledge help with tweets and retweets from the members of the eNovelAuthorsatWork group and a catchier book description created with advice from Bryan Cullen’s FB group Selling for Authors.

My thoughts:
Free promotion can work if you have a good “street team” for sharing.
The boost is temporary.
Discounting to 99c helps to track the results and brings in more readers.
What strategy works for you?
Posted by Aurora Springer at 4:38 PM