The Followers of Torments Saga by K Caffee 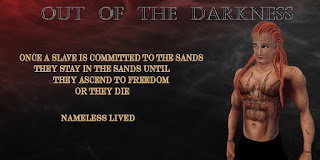 K. Caffee is a full time graduate student who has bowed to the pressures of her muse to get the stories she likes to tell out into the big world. She has always enjoyed entertaining others with her flights of fancy, and now invites you to come along for the ride. When she is not writing, or studying, she is a willing servant to her two cats who sometimes provide inspiration for her stranger characters.

The Followers of Torments Saga

Book 1: Out of the Darkness
Nameless was orphaned at birth in the cells of the Melkreschen gladiator pits. He struggles to learn the skills needed to prosper under his trainer, and to survive the bloody combat, where success means living another day and failure means death.

Offered to the dark goddess of the realm, he is accepted as one of Hers. Living by her sufferance, he strives towards freedom and survival. If he wins his way to freedom, will he remain Her living avatar or will he seek to become his own person?

Book 2: Remember the Shadows
Nameless, a Silk turned Runner continues his personal struggle to define his place in society. With his first Silks, he attempts to change the system from within through the very means he despises, but fate hands him an unwelcome reward for his efforts. Will the oaths he made to himself, his goddess, and his Silks provide enough direction for him to succeed when all else fails?

Book 3: Into the Sunlits
Nameless has lost nearly everything when the Web Mother rewarded his work, and now must rebuild from the ashes of his victory. With only his trainer, he journeys to another realm in search for new potential Silks to honor the oaths he gave to Her.

Developing a stable of potential fighters around an unusual group of captives, teaches Nameless some of who and what he is outside his rank and goddess’ living avatar. His single-minded self-imposed quest leads him into trouble that pulls him away from his new captives, leaving their care in the unstable hands of his trainer. When the group is reunited, the resentment expressed by one of the captives drives him to the edge of sanity. There he is tempered and forged into a new force. But is he a force of balance, or a force of chaos?

A little bit about the series:
The series started as a role play back story for Nameless about 10 years ago.  When the group I played with drifted apart, I thought I was done with him.  In August of 1014, the story decided it was not done with me.  I was enrolled in college with a daunting schedule of twelve graduate level hours when the story caught up to me.  I was given the ultimatum:  Write the story, or I wouldn’t be allowed to sleep.
I tried, I really did try to wiggle out of the clutches of my writing bug.  Obviously, it won, and I lost.  However, despite being a little overwhelmed at times, I’m grateful for where this story has taken me.  It is a dark fantasy, yet I also feel that it provides a little hope for those suffering from mental illness.  In researching for both Nameless, and one of the support characters who is introduced in Into the Sunlits, there are a wide range of issues I wind up touching on.  From being ostracized, exiled, and neglected to being accepted despite having a mental disorder, or looking different.
Yes, some of the actual facts are well hidden – this is fantasy after all – but at the core of each character that is introduced, there is something there that today’s society finds reason to hate, fear, or distrust.  And, yet, through it all, Nameless and his captives grow as people, and find acceptance among themselves.
As an author, I have taken up the challenge I offer to any other writer, blogger, or fellow published author – be a beacon of hope.  It does not matter which genre you write in, you can still show the world and influence your readers, that being different does not mean you cannot find and make friends.