A likely prospect - Snippet from TRAPPED for #WeWriWa #SciFiRomance

I’m continuing my new story, Trapped on Vkani, and hope to set up a pre-order soon. It will be book 3 in my series Atrapako on Eden. The settings are two remote planets: Eden, a terraformed planet with a colony of humans; and Vkani, an inhospitable planet with scaled human(oid) aliens. You can read about the planets and their inhabitants in my Blog Post HERE.

Maya and her team had planned to explore the ruins of an ancient civilization in the radioactive Deadlands. But before they landed, a sandstorm smashed into their shuttle. Now, they are trapped. The shuttle is buried under a thick layer of sand, they cannot communicate with the space station, and their supply of air is running out.

You can read last week’s snippet here -https://auroraspringer.blogspot.com/2019/02/no-answer-snippet-from-trapped-for.html
This week, I’m skipping to the second Chapter where we meet the hero, a native of the planet. He will collide with Maya and her team in Chapter 3 in one of my favorite scenes.
[Note, minor change in punctuation to fit 10 lines.]

On a ridge on the border of the Deadlands, a hooded figure peered through spyglasses at the desert. Sa Vittaran Viktu bared his teeth in satisfaction. A storm of that size could scoop out tons of sand, exposing long-buried ancient ruins. He had scavenged many strange treasures in this region during the last three seasons. By his calculations, he could risk one more raid before making the long journey to his house for the hot season. Once the cloud settled, his crew could search until noon; enough time to delve into the ruins, whilst leaving a safe margin against overexposure to lethal radiation.
The tornado whirled away, spinning deeper into the Deadlands, and he adjusted the magnification to zoom onto the trail of destruction. The squared outline of a wall hinted at a likely prospect within an hour’s journey.
As the clouds of sand dissipated, he turned to look down at his crew and raised his hand. At his signal, the two Reds tightened the leading reins of the yushos and slapped the armored flanks of the large beasts. 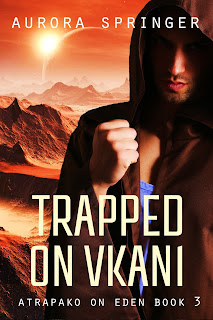 Marooned on a desolate planet, joining forces with the enemy is their only hope.
Maya Pandita spent years preparing for an expedition to the Deadlands. But her dreams of unearthing ancient artifacts are shattered when her shuttle is buried by a violent sandstorm, and her team is abducted by the scaled inhabitants of the planet. Maya and her companions must try to outwit their blue captor and call for help before they die in the toxic atmosphere.
Sa Vittaran has a problem in his claws. Along with treasures from the ruins, he has retrieved three smooth-skinned foreigners. They will die if he leaves them in the desert. Yet the puny creatures have little value as slaves, except perhaps for the impudent woman who claims to be their leader. He plans to keep her. Her knowledge of the ancient texts will be an asset if she can survive the long trek to his house.
An attack by marauders forces Maya and the Blue leader into a wary alliance. They must work together to thwart the bandits and reunite their company. Can Maya convince Sa Vittaran to help her team? If she fails, they are doomed to a short unpleasant life on the desolate, war-torn planet.

Pre-order at Amazon for release on March 22nd.

The first book in this series, The Lady is Blue, will be 99c for the rest of February at Amazon  iBooks  Kobo  B&N  GooglePlay 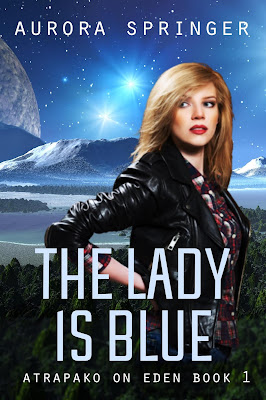 Dr. Lucy Stannis’ quiet life as the chief biologist in the small human colony on Eden is interrupted when an alien spaceship arrives. She is thrilled to meet the captain, the formidable Sa Kamizan. But, arrogant scaled Atrapako plan to subdue the puny humans, and conflict threatens the peaceful populace. Lucy must employ all her skills to discover the aliens’ secret and save the colony.


As always, I’ll be happy to reply to your comments.

Please return to www.wewriwa.com to sample the works of the other writers.

Email ThisBlogThis!Share to TwitterShare to FacebookShare to Pinterest
Labels: Atrapako on Eden, Trapped