Liftoff - Excerpt from my new Sci-Fi novella for #WeWriWa

I’m continuing with snippets from my new science fiction novella. Writing and editing are going well. For now, I’ll continue from last week. The heroine, Josie, has just learned that her planet is in imminent danger of invasion by the Emperor’s fleet. She is accompanied by her crew, Butch and Drin. (You may note certain modern parallels, although my plot predates current events.)

You can read last week’s snippet at https://auroraspringer.blogspot.com/2022/02/time-to-fly-next-excerpt-from-my-scifi.html

The final lines reveal her decision: She swiveled to face the Star Condor and aimed her forefinger at the sky. “We’re flying. Pronto.”

“Great,” Drin exhaled in a rush of relief.

Josie strode up the short ramp. Within a minute, she and her crew were buckling into their seats on the bridge.

“Wake up, Nina,” she called to the Condor’s AI. “We’re going for liftoff.”

She ran a perfunctory flight check. Speed was essential and she and Butch had done a full inspection only half an hour earlier.

The engines sang as the ship raced along the concrete of the airfield.

An irate voice sounded on the com, “Star Condor, Spaceport Traffic Control here. What are you doing with that ship?”

Ten lines plus a little more:

“No ships can leave the planet. Governor’s orders.”

Hitting the starter, Josie shouted, “We have to deliver a valuable package.”

Under tight control, the ship shot up through the clouds. Nothing on the planet could stop them now.

As the Condor soared above the atmosphere, Josie felt the familiar thrill of escaping the drag of gravity at the planet’s surface.

Seated in the adjacent seat, Drin said, “Hey boss, what is this valuable cargo?”

“An old vase. It’s my Aunt Gabrielle’s inheritance from my father. The vase is an ancient Solarian artifact, an ugly greenish color, and extremely valuable.”

“Compute a course for Wick’s Paradise.” 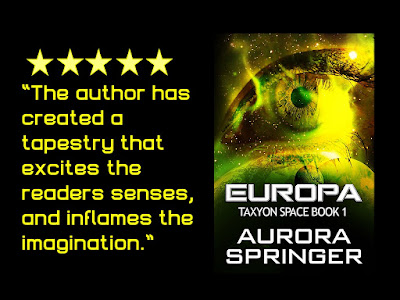 If you’re in the mood for another thrilling Sci-Fi adventure, my book, Europa, is free for a limited time.

Posted by Aurora Springer at 10:06 AM