Characters in A Tale of Two Colonies #SciFiRom for #SFRB Showcase

Welcome to the SFR Brigade May Showcase!
For this month’s showcase and near the third anniversary of my indie author career, I’ll return to an older book, A Tale of Two Colonies. The idea for this story was conceived a couple of decades ago, although I did not complete and publish the book until 2014. This tale about colonization of an exoplanet with glimpses of different dystopia is now available at several retailers.
Please remember to check out the posts from the other participants at http://sfrcontests.blogspot.com/p/sfr-brigade-presents.html

Blurb
Fight for freedom. Fight to survive - For refugees from an overcrowded Earth, dreams of a better life on an alien planet transform into a terrifying battle for survival.
Nothing will stand in the way of Tiger Lily's dream of escaping the subterranean slums of Terra and visiting the stars. She enters the fierce competition for a place in the scout team on the next spaceship to the remote planet of Delta, where an earlier colony disappeared. Before the ship departs, the arrival of a mysterious message from Delta suggests that the descendants of the first colonists may have survived.
A risky mission to seek the lost colony exposes the scouts to unexpected attacks, and they encounter a grim warrior in the isolated valley. Has Tiger Lily met her match in the tortured man? Is he leading them to safety or further danger? And who are the real rulers of this strange world?

Here is an excerpt with the heroine on the dystopian Earth she will soon leave.
Lily strode through the grimy subterranean passages to her tiny room, flushed with the success of her performance and indifferent to the hunched figures of the silent passersby. She ignored the group of five ragged youths lounging idly at the corner, until they moved deliberately in her direction.
“Out alone!” one man jeered, clearly believing her to be vulnerable.
“We’ll give you a good time!” another man called with vulgar intentions, reaching out to grab her arm.
She swiveled rapidly, punching him below the belt. He collapsed with a moan.
Two others advanced angrily on her. She leaped at them, aiming a vicious kick. Her target crumpled in agony, clutching at his groin. The third man hesitated, unluckily for him. Her fist thudded against his jaw and he sagged to the ground, unconscious.
One of the two youths, who had hung behind well out of the action, shouted, “Watch out! It’s Tiger Lily. I saw her fight in the arena.”
The other man called, “She’s big trouble! Let’s get out of here!”

On the new planet of Delta, her scout team meets the hero and hostile natives.
While the others were resting, Lily wandered off to examine a rocky outcrop where she had caught a glimpse of red among the rocks. When she reached the outcrop, nothing was visible. She paused and stared up at the forbidding grey sky.
Suddenly, her leg was pulled from under her. Screaming, she toppled to the ground. Huge chitinous jaws trapped her leg, dragging her toward a red gaping mouth. She twisted around, wedged her knife between the jaws, and wrestled the blade from side to side, trying to loosen the grip on her leg. A needle-like tail arched down toward her helpless struggling body.
In a rush of air, Conley leaped and slashed his sword through the menacing tail, catching the severed end in his other hand. Standing astride the crumpled body of the dangerous creature, he sliced through its narrow neck.
Lily sighed in admiration. He looked magnificent, like a tall, medieval knight brandishing a heavy sword. 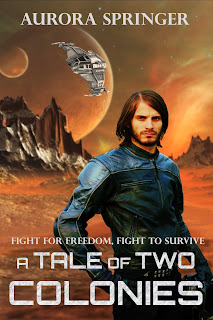 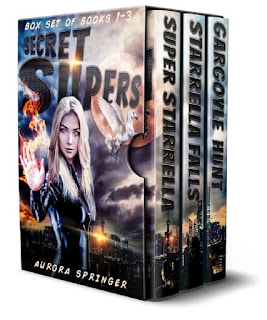 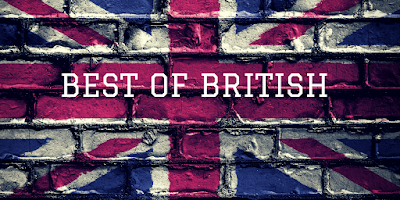 
Sign up for FREE eBooks: http://auroraspringer.blogspot.com/2017/05/free-ebooks-in-scifi-dark-fantasy-and.html
Posted by Aurora Springer at 10:13 AM