To celebrate the Blue Moon, members of the Science Fiction Romance Brigade are running a contest over 19-23 May at http://sfrcontests.blogspot.com. Enter the Rafflecopter at the end of my post to win amazon gift cards and science fiction romance novels.
Each author offers different gifts: books or gifts cards.


Two blue moons appear in the Grand Master’s Trilogy
Athanor Griffin, the Grand Master of the title, resides on an isolated planet. In this excerpt from Grand Master’s Game, Athanor shows his pawn and lover, Violet, the view from the Griffin’s Eyrie.
Athanor murmured, “Let us watch the stars and forget our troubles for tonight.” He lay on his back and rested his head on her lap. Violet gazed at his grim face and curled her fingers in a strand of his dark hair. His eyes glowed with the calm blue that was their quiescent state. She bent to kiss his cheek.
Violet gazed up as he wished. At first, only two or three of the brightest stars were visible in the twilight. Fainter stars appeared gradually as the last dim light of the setting sun vanished and the horizon darkened from blue to the black of night.
Suddenly, she understood. Above them, the specks of stars resolved into a great spiral arm of the galaxy. Athanor’s planet was positioned above the plane of the galactic disk. A second spiral arm was visible beyond the first, and another, still further and fainter, coiled on the far side of the disk.
“I can see the whole galaxy,” she breathed in awe.
“Yes, the entire galaxy is the playground of the Grand Masters. Some are greedy to annex ever larger sectors. My strategy will oppose their ambitions.” His words were a sober contrast to his normal arrogance and wry humor.
Shuddering at the enormity of the Grand Masters’ ambitions, she complained, “Now, I’m frightened! You’ve shown me the vastness of space and told me it’s a battleground for your games.”
He kissed her cheek, “Hush, my dear pawn, it is nothing new. Men have always yearned to conquer the galaxy. Relax in my arms and enjoy the night sky.”
She took comfort in his words and gazed up again. A meteor blazed across the sky and she breathed in wonder at the bright beauty of the myriad stars. A pale light appeared against the opposite mountain peak and a blue moon rose. As she watched, a second full moon emerged and two blue moons shone in the sky.
“Oh!” she gasped. “The moons are like your eyes! Did you make them, Athanor?”
His laughter rumbled into her mind. “No, my powers are not so immense. I merely changed the color by introducing blue sand. It took me several years to complete the task.”
Privately, she wondered if he could have used his time for a better purpose.
“You may be correct,” his thought came. “I was young and proud of my new domain.” She had forgotten how closely their minds were intertwined. 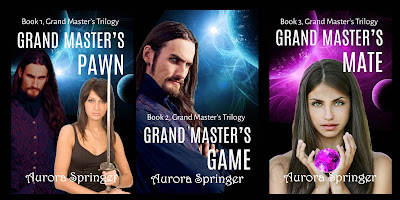 I am offering two eBooks to the Winner of our contest:

Grand Master’s Pawn, Book 1 of the Grand Master’s Trilogy
One young woman challenges the super psychics ruling the galaxy, and finds an impossible love.
Young empath, Violet Hunter, dreams of exploring exotic planets as a Grand Master’s pawn. When life-threatening cracks appear in the teleportal web, Violet is tasked with investigating the disruption. Suspicions point to the twelve Grand Masters, and she must penetrate their curtain of secrecy to identify the culprit. Her challenges escalate when she meets the enigmatic man behind the griffin avatar. Armed with only her erratic powers and a mishmash of allies, she must challenge the most powerful beings in the galaxy.

The Lady is Blue, Book 1 of Atrapako on Eden
Intrepid scientist solves mystery of scaly aliens.
Dr. Lucy Stannis leads a quiet life as the chief biologist in the remote human colony on Eden, until an alien vessel makes first contact with the colonists. She is thrilled to meet the spaceship captain, the impressive Blue, Sa Kamizan Veedak, despite the scaled bodies and sharp claws of the formidable Atrapako. Conflicts arise, threatening the whole colony as well as Lucy’s tenuous friendship with Sa Kamizan. Lucy must employ all her skills to discover their secret and save the colony.
If you like feisty heroines and mysteries where deceptions abound, then you’ll enjoy this science fiction adventure with a surprise twist at the end.

Posted by Aurora Springer at 1:00 AM